I am broadly interested in observational astronomy. I have authored papers on supernova explosions, tidal orbital decay of exoplanets, supernova cosmology, stellar evolution and galaxy clusters. Currently, I work with Alex Filippenko on measuring polarized light from transient events like supernova explosions and tidal disruption events. In the past, my work led to the first detection of a hot Jupiter spiraling in to the host star because of tidal orbital decay. Below are some more details about my current and past work.

Extragalatic supernovae (SNe) are spatially unresolvable, even with the best of ground-based interferometers. For example, the most powerful ground-based interferometer, the Event Horizon Telescope, can currently achieve a resolution of ∼ 60 𝜇as. For comparison, the minimum resolution required to study the geometry of a nearby SN, for instance 3 Mpc away would be ∼ 10 𝜇as. Fortunately, specpol, which measures polarization as a function of wavelength, provides a unique approach to the study of the SN explosion geometry and its structure. 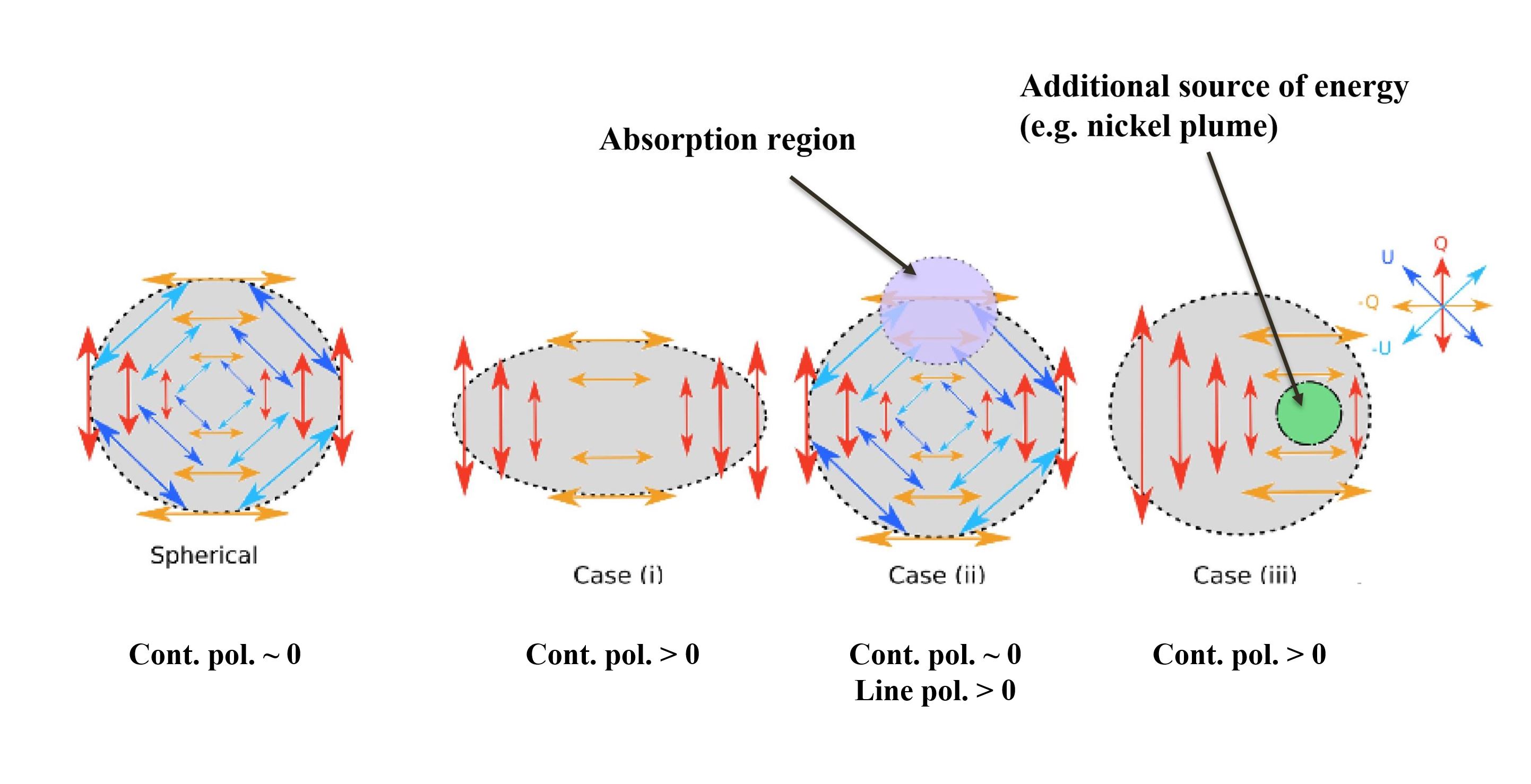 My current goals are to constrain the progenitor system(s) and explosion mechanism(s) that lead to Type Ia supernovae. Specpol studies have demonstrated that these explosions show remarkable sphericity of the ejecta. Si II and Ca II absorption lines are often highly polarized (~ 1%) in these SNe, indicating high asymmetry in the spatial distribution of intermediate-mass elements synthesized in SNe Ia. We hope that by studying specpol of enough SNe Ia, we may be able to differentiate between the various theoretical models for these explosions. The plot below shows the polarization signal of the high-velocity Type Ia SN 2019ein. 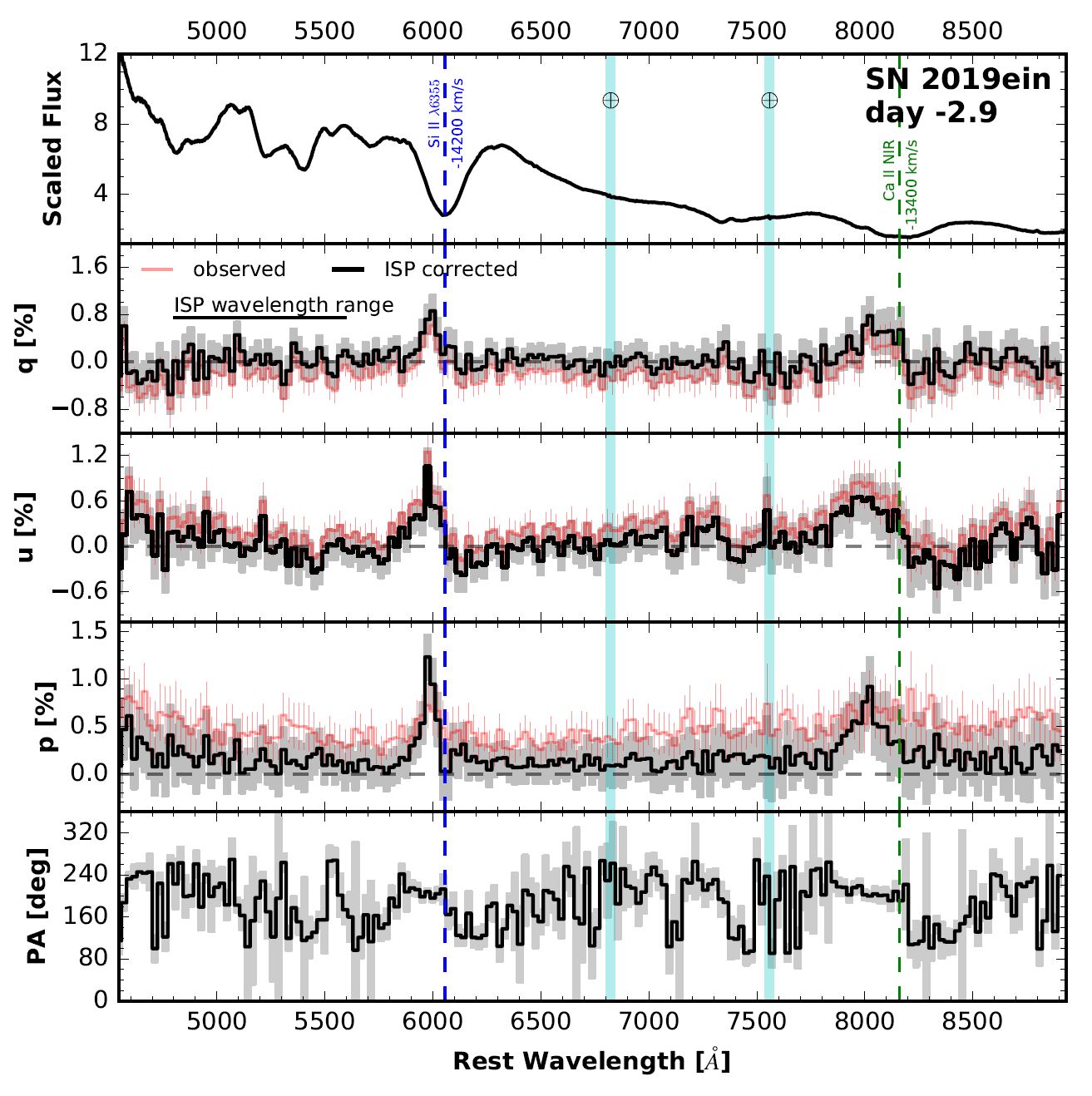 Occasionally a star gets too close to a supermassive black hole (SMBH), at which point tidal forces on the star exceed its self gravity, tearing apart the ill-fated interloper. Roughly half of the stellar debris is bound in a range of highly-eccentric orbits around the SMBH, whereas the rest goes unbound. The bound material is expected to fall toward the SMBH, forming an accretion disk. All TDEs were originally expected to be extreme-ultraviolet (UV) and X-ray emitters. However, many of them were found to show bright near-UV/optical emission with a luminosity much higher than that in the X-ray band, igniting a long-standing controversy on the origin of the bright optical emission and on the apparent absence of X-rays in these TDEs. Two classes of solutions have been proposed: (i) the accretion disk does produce ample X-ray emission, but it gets reprocessed by an optically thick gas layer located at a distance much larger than the tidal radius and (ii) instead of accretion, TDEs are powered by shocks resulting from collision of streams in the outer regions of a highly-eccentric disk. One way to distinguish between these two models is to study the geometry of the gas around the black hole.

I led a spectropolarimetric study of the TDE known as AT 2019qiz, which provided the first direct constraint on a the distribution of gas around a black hole after stellar disruption. We found that polarization was consistent with 0 percent at maximum brightness and only modestly higher (1 percent) a month later. These observations lead us to conclude that the gas around a SMBH is not in highly eccentric disks. Instead, we find that a roughly spherical wind outflow from the TDE enshrouds any accretion disk inside, favoring the solution (i) introduced above.

The orbits of many of the hot Jupiters are expected to be slowly shrinking owing to tidal interactions between the planet and its host star. A hot Jupiter completes one orbit around its host star in ~ 1 day, whereas the star spins on its axis on a timescale of a few tens of days. Consequently, the bulge lags slightly behind the orbiting planet tugging back on it, sapping angular momentum from the orbit and transferring it to the stellar spin. Below is an illustration of the lagging tidal bulge. Similar tidal effects are the reason why the moon is slowly inching away from the earth. In the earth-moon system, the direction of transfer of angular momentum is from the earth’s spin to the moon’s orbit, owing to the fact the moon’s orbital frequency is much smaller than the earth’s spin frequency. 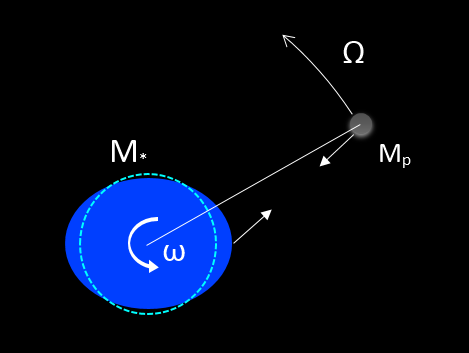 The tidal bulge raised on the star by the planet has to travel around the star, encountering resistance from the stellar layers. The efficiency with which the tidal bulge dissipates orbital energy as heat is characterized by the tidal quality factor Q*. It has proven difficult to calculate the tidal quality factor from first principles, with predicted values spanning several orders of magnitude from 105-109.

My work as an undergrad at MIT led to the first direct detection of the decaying orbit of the hot Jupiter WASP-12b. By measuring mid-transit times of this planet and combining them with historical mid-transit times spanning over a decade, my team and I were able to show that this planet is slowly spiraling inward at a rate of ~30 ms/year. Initially, we were unsure whether the apparent decrease in orbital period was due to tidal effects or whether we had witnessed a portion of an apsidally precessing orbit. A couple more years of monitoring has now unequivocally confirmed that WASP-12b is on a collision course with its host star and is expected to merge with its host star in ~ 3 Myr.

The goal now is to understand what factors affect the rate of tidal orbital decay. What is so special about WASP-12b that it is undergoing orbital decay but other similar hot Jupiters are not?